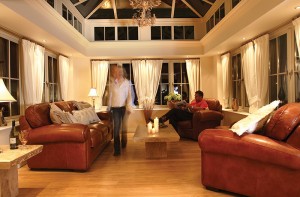 A new national consumer poll by super-fabricator Sierra reveals appearance and security are the single most important factors for homeowners when buying new windows and doors.

The survey of almost 1,000 households found broadly that appearance, security and then price, were the single biggest priorities for home owners when buying new windows and doors followed by energy efficiency.

This was reflected in the 30-45 year old category where 28 per cent of respondents cited security as the single biggest purchasing driver followed by appearance (25 per cent), price 23 per cent and energy efficiency (21 per cent).

Finance and low maintenance qualities were listed by the remaining three per cent of respondents as the major influences on their purchasing decisions. This proved an anomaly as 56 per cent of respondents overall cited PVC-U as their preferred material choice for its low maintenance qualities over timber (28 per cent), aluminium (10 per cent) and steel (5 per cent).

The survey also found that 23 per cent of respondents in this age grouping said that they were currently actively considering the replacement of their existing windows and doors.

In the 45-60 age category 27 per cent of respondents said that they were considering replacing windows and doors. While security still came top, energy efficiency took on increased importance, cited as the most important feature that they looked for by 25 per cent of respondents. Low maintenance qualities also taking on more importance for this grouping. Respondents aged 60 and over listing similar drivers.

Brian Webb, divisional sales and marketing director, at Sierra parent, Epwin Group Building Products Division said: “The findings we have suggest that energy efficiency still isn’t quite striking the chord with consumers that you might expect it to given the significant investment that we have seen from the BFRC and the Window Energy Ratings Campaign.

“What will be interesting is how the governmental push, the Green Deal and significant increases in energy prices will impact on households’ awareness of the energy efficiency agenda in the next few months going into the winter. My money would be on far greater consumer awareness of energy efficiency by spring.”

This was also reflected in findings 18 to 30 category. Here, while energy efficiency and security remained important, price took on greater significance, cited by 31 per cent of those responding as the major influencing factor on their purchasing decisions, followed by appearance.

More broadly the survey did suggest that despite broader economic instability and market maturity, there were some grounds for optimism for the UK window industry. In particular home improvements, were ranked as the number one spending priority by households aged 18-30, 30-45 and 45-60.

Of these the 30-45 year old age group placed most importance on home improvements, with 45 per cent citing it as their major spending priority, closely followed by the 45-60 category (40 per cent).

Only those households aged 60 or above listed home improvements (38 per cent) as a second placed spending priority behind holidays (44 per cent).

And there was additional solace in the study for the window industry. Window and door replacement was ranked by both the 30-45 and 45-60 year old categories as among their top home improvements after extensions, kitchens and bathrooms.

Webb, added:  “While we’re seeing a tightening of consumer spending, particularly on the high street, home improvements remain a spending priority for many of us, whether that’s because we’re spending more time at home or perhaps because we’re looking for more space, in addition to distress replacement.

“With focus on market contraction and maturity alongside, wider economic turmoil it’s sometimes a little too easy to lose sight of the opportunity that remains out there if you have the right product portfolio, backing and support and you know who to target.  On a personal level, I’m quietly encouraged by what we have seen.”

For more information on Sierra, its product range and installer support programme visit www.sierrawindows.co.uk or call0808 178 3455.