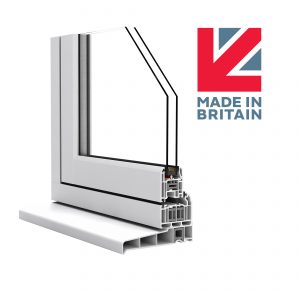 The Made in Britain campaign aims to bring together the entire manufacturing community in Britain so businesses can benefit in sales, marketing, exports and PR. It encourages buyers, specifiers and consumers to treat the Directory as the procurement site for British-made goods and an invaluable way to find new suppliers and buyers.

All of Epwin Window Systems’ operations are based in the UK and are covered by regulations designed to protect the environment. By keeping its production in the UK, it does not contribute unnecessarily to transport pollution, plus it has control over its supplies, its sources and its quality.

UK production also offers another clear benefit for anyone working with or living with the products. Gerald says: “There is no need to import system products, because the quality of what we make here is exceptional and our designs are as advanced as those from anywhere else in the world. Our profile systems are designed for the UK’s housing stock and no adaptations are necessary to force a square peg into a round hole.”