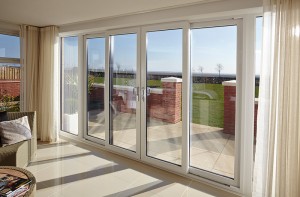 PatioMaster, the inline sliding door specialist has increased its share of the patio door market year on year from 24 to 29 per cent.

Speaking at the PatioMaster National Conference, Chris Jones, national sales manager, said the regional patio door network continued to perform strongly despite challenging market conditions on the back of its expanded offer and established reputation for product reliability.

He said: “Reliability is a huge value to our trade customers. They can sell it, fit it and forget it. In a market that’s tight, that quality and performance is critical. Call backs and problems can simply blow away margin.

“We have an established and highly engineered product, where those problems just don’t happen. And on those rare occasions that there is a glitch, wherever you are in the country we’re just down the road to put it right.”

Held at the Park House Hotel, Shifnall, Shropshire and attended by more than 25 guests, the day also included the launch of a new sculptured sash detail, developed to compliment sculptured systems offered by many of the UK’s leading systems houses.

Network members were also briefed on the launch of a new and flexible colour offer, giving them access to non-standard foils in as little as 10 calendar days, plus  top Door Energy Rating  ‘A’ rating specification.

Presentations were also delivered on regulatory change as well as potential opportunities under the Green Deal. Later, a seminar and workshop explored themes including value-based pricing.

PatioMaster boasts ten authorised manufacturers nationally from East Kilbride in Scotland to Paignton in Devon and from Lowestoft in Suffolk to Kidderminster in Worcestershire, PatioMaster offers a unique national network of specialist regional manufacturers coupled with the back up of a comprehensive national customer support strategy.

“We have an innovative new product and service offer but it’s built around a tried, tested and highly engineered basic proposition. We believe the quality of product we offer, the product choice, its advanced performance add value.

“This is underpinned by a regional network of specialists whose expertise and after sales support is second to none not to mention a brand name which most definitely ‘does what it says on the tin’.”

To find your nearest PatioMaster or for more information on the PatioMaster network call 0808 178 3370 or visit www.patiomaster.co.uk.