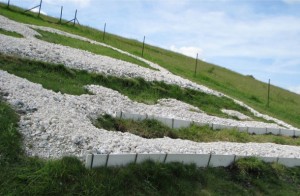 Swish Building Products has supplied over 200 metres of white PVC-U flat board for a unique restoration project on behalf of the Fovant Badges Society. The boards have been installed as part of an experimental maintenance programme to restore and protect three of the regimental badges carved into the Fovant Down in Wiltshire during the First World War.

Their location, carved into the side of a 30 degree slope is a constant issue for the conservation team, coupled with a combination of loose chalk, gravity and an invasion of grazing cattle! “Gravity continues to be our biggest challenge when it comes to maintaining the definition of the badges,” comments Don McLaren, one of the conservation officers of the Fovant Badges Society, “…and it’s not helped by the horrendous rainfall we keep having. We wanted a solution which would help keep the chalk in position without detracting from the traditional construction of the badges.

“We chose the PVC-U flats board from Swish simply because they’re unobtrusive, flexible, durable and will withstand the ravages of the weather. The boards have been positioned along the downhill edges of the badges with the hope that they will preserve definition and keep the chalk up the hill.”

The trial will assess whether the chalk continues to migrate down the hillside; if the boards stand out as an artificial aid particularly once the chalk begins to weather and discolour; and also whether the fixing methods are adequate.

Scheduled by English Heritage as Ancient Monuments the Fovant Badges are of national historical importance. The chalk emblems were carved into the hillsides by soldiers undergoing training for war. “Having your regimental badge on the hill instilled pride and loyalty to their regiments – so vital for morale,” continues Don. “The remaining badges now commemorate those British and Australian soldiers billeted at the military camp in the village of Fovant, many of whom were lost during The Great War, and mark the sacrifices made by British Service men and women since that fateful time.”

By the end of the First World War there were over 20 discernible badges. Some maintenance was done between the wars, but during the Second World War these were left to become overgrown and indistinguishable to prevent enemy aircraft using them for navigation. Between 1948 and 1951 two more badges were cut in remembrance of two Wiltshire regiments, and another on behalf of the Royal Signals was added in 1970.

With the trial period soon to enter its most testing season, the conservation team are keen to see how the boards perform, “So far, so good,” concludes Don, “…at this stage we feel the boards are a success and we’ve received some favourable comments.” The Society aims to complete the restoration of all of the badges by 2016 ahead of their centenary celebrations, marking 100 years since the carving of the first regimental badge.