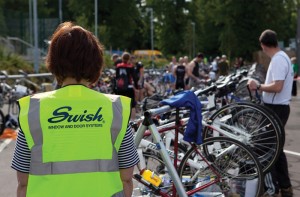 A promotional campaign by Swish Window and Door Systems which successfully tapped into this summer’s Olympic ‘buzz’, has been shortlisted for the G12 Awards

Set up by doctor and philanthropist William Penny Brookes to encourage healthy living among Shropshire’s populace, the first Wenlock Olympian Games was held in Wenlock in 1850. This later became a founding influence on the modern Olympic Games.

Entering into the spirit of 2012, Telford-based window and door specialist Swish signed up as main sponsor of the triathlon at the beginning of this year.

Sonya Baird, brand manager, Swish Window and Door Systems said: “Firstly, as a Shropshire-based business and as part of our programme of community engagement, we wanted to support a local event.

“But we also recognised that in an Olympic year and as a founding movement of the modern Olympic Games, it gave us huge potential for exposure and for members of our Authorised Installer Network.

“This translated into a 43 per cent increase in leads into the Swish website in three months before, during and after the Olympics.”

The annual Wenlock Olympian Games are described by its organisers as a “festival of sports and the arts competitions at their friendliest and best, which welcomes local, national and international competitors”.

As main sponsors, Swish contributed directly to funding of the 162-year-old event, while employees also gave up their time to pitch in with its running.

Baird added: “Despite strict controls governing Olympic sponsorship, the exposure for Swish as a brand was massive, directly feeding into Swish Authorised Installer network as part of our continuing programme of investment. This is of real and tangible advantage to our customers in winning new business and in enhancing their own brand reputation.”

The Swish Authorised Installer Scheme was launched in 2007 at the same time as the company unveiled its new thermally efficient five chamber suite. It offers dedicated lead generation activity from direct mail and email campaigns to giveaways targeted at local home improvers.

The winners of the G12 Awards will be announced live at the G12 Awards Presentation and Gala Dinner hosted by comedian, TV and radio personality, Patrick Kielty at the Hilton on Park Lane Hotel, London, on Friday 23 November.